What are deferred prosecution agreements (or remediation agreements), how did Canada get them, what are the potential benefits and what are the down sides? Patricia Adams of Probe International is firmly in the latter camp: “… they turn the prosecutor into the prosecutor, the judge and the jury. Because of that they are undermining the rule of law — they are essentially political instruments.”

This article, by Andy Blatchford, was first published by the Prince George Citizen 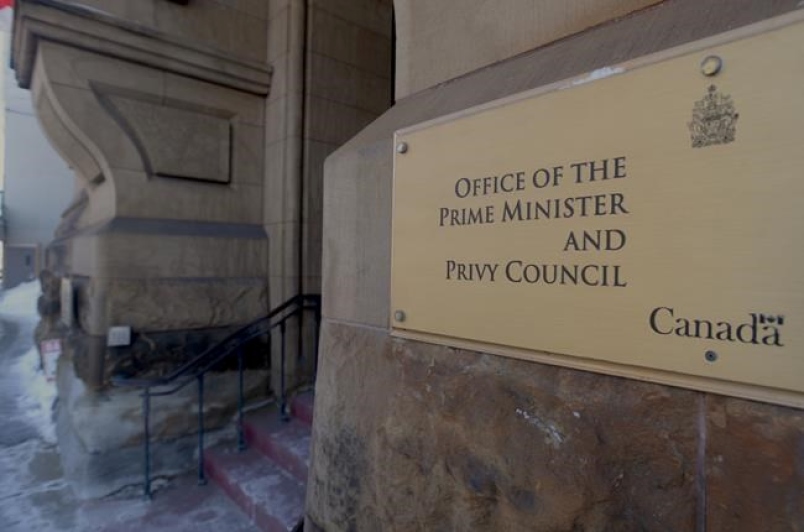 The main door to the Office of the Prime Minister and Privy Council office is seen in Ottawa, Monday, Feb.18, 2019. The legal tool at the heart of the scandal that erupted in the Prime Minister’s Office was far more unassuming last year on its way into Canadian law. The Canadian Press/Adrian Wyld.

OTTAWA — Engineering and construction giant SNC-Lavalin sought to be the first firm to avoid criminal proceedings by negotiating a “remediation agreement” — using a new legal tool that either spares innocents from being punished for the corporate misdeeds of others or lets the biggest companies off the hook when they’ve acted illegally, depending whom you ask.

Its efforts have led to a scandal that’s led to the resignation of a government minister and Prime Minister Justin Trudeau’s most trusted aide.

The Montreal-based engineering firm faces legal trouble over allegations it paid millions of dollars in bribes to get government business in Libya, which would be a crime under Canadian law.

But last fall the prosecutor’s office declined to send SNC-Lavalin an invitation to negotiate, which means the criminal case against the company will proceed. If it’s convicted, the company faces the possibility of a multi-year ban from bidding on public contracts — a key part of its business.

Here are some questions and answers on Canada’s remediation agreements:

What are remediation agreements for?

The Criminal Code says a remediation agreement aims to denounce a company’s wrongdoing, hold it accountable with penalties, force it to respect the law by putting in place corrective measures and encourage voluntary disclosure of illegal activities. A primary goal is to limit the damage to individuals, such as a company’s employees, who had nothing to do with the offence — while punishing those involved in the wrongdoing. The agreements would help corporations avoid a criminal conviction that could lead to a ban of up to a decade from bidding on public contracts, including lucrative infrastructure projects.

How did Canada get them?

Other countries have similar regimes. They include the United States, where the deals are called “deferred prosecution agreements,” or DPAs.

The Liberal government held public consultations on the idea in the fall of 2017 and, in its 2018 budget, it said it intended to introduce legislation to allow remediation agreements soon. The budget, however, offered few details. Months later, the proposed amendment was quietly included in the government’s 582-page budget legislation. The move came as a surprise to MPs — including at least one Liberal. A few members of the all-party parliamentary committee studying the bill last May expressed concerns. They said they were first made aware of the push to create DPAs only after it was brought to their attention by a Justice Department official as part of her testimony. The remediation agreement regime received royal assent last June.

What does a company have to do to be eligible to negotiate an agreement?

The prosecutor can invite a company that has allegedly committed an offence into a negotiation if the case meets a number of conditions. First of all, they can only be applied to economic crimes, like bribery or fraud. They cannot be used in a situation where there’s been serious bodily harm or death, or in cases that resulted in injury to national security or national defence. The agreements also can’t be used in cases where the offence is connected to a criminal or terrorist organization. The prosecutor must also believe there’s a reasonable possibility the firm will be convicted and that the case is in the public’s interest. Finally, the attorney general must consent to the negotiation.

What are some of the potential benefits of DPAs?

Anita Anand, a law professor at University of Toronto, said she believes they can be useful legal tools to address corporate misdeeds while taking into account the needs of shareholders, employees and creditors

“It is wholly unfair to punish these many stakeholders because of the bad behaviour of a few individuals,” Anand wrote in an email. “In other words, a few bad apples should not spoil the bunch.”

Instead, she said, once wrongdoers have been identified, removed and sanctioned then corporations should be dealt with under the same approach taken in other areas of criminal law — with rehabilitation as one of the goals of punishment

Jennifer Quaid, an assistant professor of law at the University of Ottawa, said Canadian firms lobbied for a deferred-prosecution regime for competitive reasons because the United States and other jurisdictions had them. The argument, she said, is that Canadian companies, if barred from public contracts, would be put at a disadvantage compared to American multinationals that avoided convictions with settlements. Quaid also noted remediation can be a positive for prosecutors, especially because economic crimes are hard to investigate and prosecute.

What are some of the potential down sides?

Mike Koehler, an associate professor of law at Southern Illinois University, said DPAs should not be a way for prosecutors to avoid difficult cases. “It shouldn’t be easy to convict anybody,” he said.

Koehler, who believes Canada should have never adopted remediation agreements, argued that they’ve had little success as a deterrent in the United States.

“Looking to the U.S. example, if these were achieving deterrence, why do we have so many repeat corporate offenders?” he said.

Patricia Adams, executive director of the Probe International think-tank and watchdog, said DPAs allow prosecutors to make decisions behind closed doors about whether a company should be prosecuted or not, which robs the judicial system of transparency.

Quaid, at the University of Ottawa, said the criticisms include the perception that remediation can seem like an “automatic pass” for companies and that they’re designed for larger firms that employ lots of people, and not so much for smaller players.

“At the end of the day, this is accepting a reality that when big players with significant economic impact in a region get in trouble there are a lot of collateral consequences and sometimes we may decide that collectively preventing those collateral consequences is going to trump the normal response,” she said. “A lot of people don’t like that kind of messy, less-than-perfect justice, but that’s the reality that we have to live with.”