By Other News Sources on November 21, 2017 • ( Leave a comment )
Deferred prosecution agreements (DPAs) make a mockery of the criminal justice system. Join Probe International as we get to the root of this problem at our final Grounds for Thought discussion night of the year: Tuesday, November 28 @8PM. 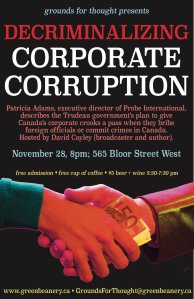 Our last Grounds for Thought discussion of 2017 will look at the use of deferred prosecution agreements to settle corporate crime cases.

Virtually unheard of in business settings prior to 2004, they’re now the latest Big Thing to counter corporate crime, and, at first blush, they make a lot of sense. Rather than completely shut down a company, squander its expertise and take down its employees, DPAs allow companies to pay a penalty and promise not to transgress again. What’s not to like? Well, lots.

For one thing, when corporations commit serious crimes, they should be punished by the criminal justice system and not through a closed-door deal with the government and Justice Department. DPAs don’t even prevent further transgressions.

We get to the root of the problem on Tuesday, November 28 @8PM. Join us for a discussion and Q&A with presenter Patricia Adams, executive director of Probe International.

Enjoy $5 beer and wine servings prior to the event kick-off between 5:30 and 7:30 PM. Admission is free. Complimentary coffee served to event guests.