Imagine waking up one day to be told your home and way of life is to be upended for the construction of a massive state water project?

“The South has plenty of water and the North lacks it, so if possible why not borrow some?” ~ Mao Zedong, 1952

The farming life: Mr. and Mrs. Xu outside the only home Mr. Xu had ever known prior to resettlement.

Like an estimated 800,000 others, Mr. and Mrs. Xu faced involuntary relocation to make way for another of China’s epic efforts to address the country’s water crisis: in this case, the South-to-North Water Diversion Project, the largest of its kind ever undertaken. An elderly couple, their meagre livelihood tied to land farmed for generations in the small village of Tutai in central China’s Hubei province, the Xus nevertheless led an independent life, rich in scenic value within close proximity to their grown children, neighbours and ancestral cemeteries; strong in the belief that, surrounded by trees, mountains and streams: “Here, we have everything.”

In the “Last Harvest,” emerging Canadian-based film-maker, Jane Hui Wang, documents the days and months before and after the Xus’ resettlement journey as they pack up and tear down their farmland home (otherwise they’d be charged for its destruction) and move toward a dramatically different reality in a stark townhouse compound hundreds of kilometres away, egged on by propaganda slogans that cheer their sacrifice as necessary for the nation. A sacrifice that includes no dogs (the Xus must leave theirs behind*).

“It is every citizen’s obligation to support the construction of key state projects.”

Although press coverage and expert analysis of the South-to-North Water Diversion Project have charted the geo-engineering giant’s various trials and tribulations in its dubious bid to move billions of cubic metres of water from the Yangtze River in the south, to the country’s arid north, the human cost of China’s penchant for radical social engineering is rarely told as intimately as it is here. The accounts of migrants’ experiences that we’ve come to know through media reports and interviews detailing withheld compensation money, diminished circumstances, loss of resources, livelihoods and community are writ large in “Last Harvest” through the eyes of the Xus.

Mr. Xu, in particular, is a compelling study of spirit under pressure; his humour and expressiveness a window to what so many experience but dare not challenge publicly in a political climate where resistance is met with oppression — although, that resistance is testing its muscle increasingly [as per China’s NIMBY environmental justice movement: read about it here].

Mr. Xu notes that policies regarding migrants have improved under the central government, which he describes as “thoughtful” toward ordinary Chinese, but says those policies fail at the local government level. Mr. Xu, filmed flipping through a propaganda handbook (each apartment has one), laments that the contents of these handbooks are not actually implemented.

After five months of resettlement, the Xus had not seen any of the compensation money they were pledged and Mr. Xu had run through various jobs at pig farms and lumber mills to make ends meet: work he cannot sustain owing to age. A plot of land the Xus were allotted for farming eventually materializes but is substantially inferior in quality to the “home” land that had supplied the Xus’ every need. Now, they must pay instead of make and grow. Everything in this new place, they quickly discover, comes at a cost.

Started in the summer of 2010 and finished in 2015, “Last Harvest” first aired at the Toronto-based Planet in Focus environmental film festival as the closing night screening on October 25, 2015. The film received its theatrical release on February 9, 2016, at the Bloor Hot Docs Cinema.

* As the film progresses, dogs do begin to appear at the apartment complex. 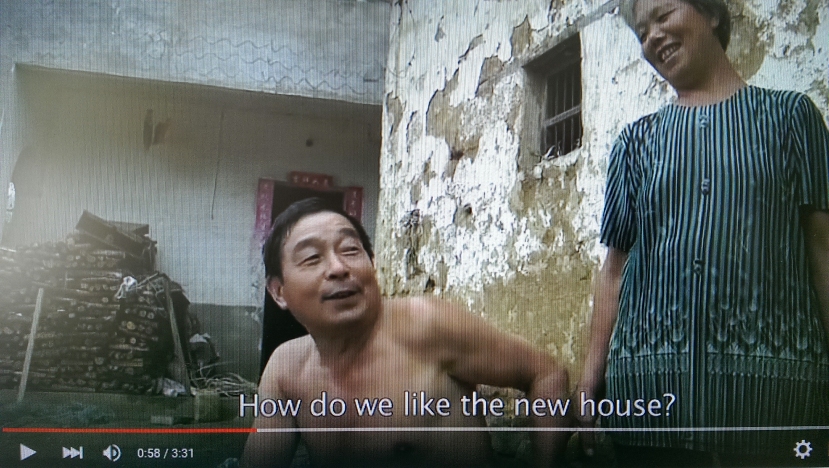