The heat is on for the ‘living fossil’

Despite its long lineage as one of the world’s oldest living species, the Chinese sturgeon — known as the “living fossil” because it dates back to the Cretaceous period — may not survive the surging dams and bridges built over the Yangtze River, reports China Daily.

This article, by Cheng Longmei, Xinhua and Liu Baoping, was first published by China News Service (CNS) on December 9, 2014 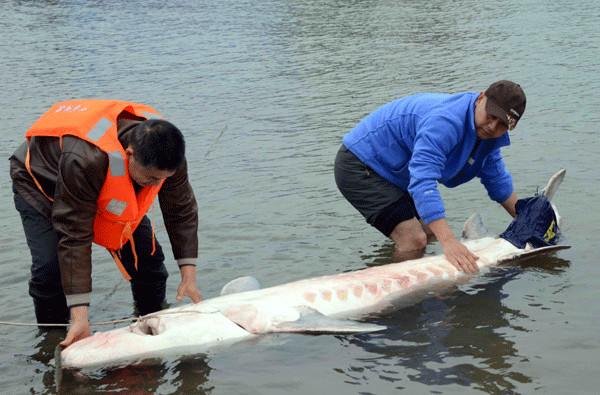 The Chinese Sturgeon has been around for 140 million years, but economic development may soon result in China’s rarest native species disappearing for good.

Having spent more than three decades researching and protecting the wild Chinese sturgeon, Wei Qiwei can’t stop worrying that this rare, ancient fish may become extinct in the coming decades.

In the past two years, researchers have discovered no evidence of natural reproductive activity in the Yangtze River for the first time since the species was first recorded in the 1980s, according to Wei, a researcher at the Chinese Academy of Fishery Sciences.

“If the wild fish cannot reproduce naturally, those currently alive will be the last of their kind,” he said.

The academy’s records show that before 2003, female sturgeons laid their eggs from late October to late November, but between 2003 and 2012, a number of factors resulted in the spawning season being delayed by a month, to later November and early December.

Although the researchers will continue to observe the fish, the chances of detecting sturgeon eggs in the section of the Yangtze River near Yichang, Hubei province – the site of the Three Gorges Dam – are slim.

The Chinese sturgeon is one of the world’s oldest living species, dating back to the days of the dinosaurs about 140 million years ago. But despite its long lineage, the fish may not survive much longer, according to Wei, who warned that its extinction may be one of the prices China pays for its rapid economic development, especially the surging dams and bridges built over the Yangtze River.

The optimum water temperature for the sturgeon to reproduce is between 15.3 C and 20.2 C, but as heated water stored in the Three Gorges Dam is released into the Yangtze River, the average temperature has risen and affected the reproductive cycle, according to Wei.

“The Three Gorges Dam and others built in the river system are affecting egg laying because the water discharged from them has absorbed heat during storage, and that’s raised the water temperature downstream,” he said.

Gao Yong, deputy director of the China Sturgeon Institute, said global warming has also contributed to the temperature change in the river.

The hydropower project, which started in 1993, includes a 185-meter-high dam, a five-tier ship lock, 26 hydro-powered turbo-generators, and six subterranean generators that were installed in 2012. The river’s average water level was also raised, from 88 meters above sea level to 135 meters in 2003, and then to 175 m in 2010.

Wei said the dam-building projects have reduced the number of spawning sites: “Following the construction of the Gezhouba Dam in Yichang, only one spawning site is left for the sturgeons.”

Ma Jun, director of the Institute of Public and Environmental Affairs, an NGO in Beijing, said in a previous interview that if the habitat continues to shrink, the aquatic ecosystem near the dam will be completely destroyed.

Jiang Wei, a researcher with the China Sturgeon Institute, said the destruction of the natural habitat and environmental degradation are making it hard for the sturgeons to survive.

A report released by the Yangtze River Water Resources Commission of the Ministry of Water Resources earlier this year showed that the total volume of pollutants discharged into the river reached nearly 35 billion metric tons in 2012, a year-on-year increase of about 1.6 percent.

Moreover, a study conducted in 2009 showed that triphenyltin, a chemical applied to ship’s hulls as a fungicide and antifoulant, is probably responsible for the reduction of the sturgeon’s fertility in the wild.

Hu Jianying, a professor at the College of Urban and Environmental Sciences at Peking University who led the study, said even if the use of triphenyltin were to be banned, the chemical would have an impact on the local ecology for many years because of its slow rate of decomposition.

Other dangers facing the fish include injuries from ship’s screws, or becoming tangled in fishermen’s nets. China banned commercial fishing of the sturgeon in 1984, and established a 443 km nature zone for the endangered species in the river in 1987.

In 2005, the reserve was trimmed to 355 km so two giant hydropower plants could be built on the section between Xiangjiaba and Xiluodu on the upper reaches of the river.

The changes aren’t just affecting the sturgeon, however. Since 2003, reproduction rates have fallen among several species, according to a 2009 report from the Chinese Academy of Sciences. Four major types of freshwater carp – black, grass, silver, and crucian – have also seen a steady reduction in numbers.

The Chinese sturgeon, known as the “living fossil” because it dates back to the Cretaceous period, is at the top of China’s national wildlife protection list. Although it spawns in freshwater, the fry migrate to the ocean to mature.

Since the 1980s, fishery experts have been breeding sturgeons in captivity to stop the species from becoming extinct. Jiang said the China Sturgeon Institute’s breeding program has developed every year since it started in 2009, and 60,000 fish were born in October.

In the past decade, the institute has released more than 5 million artificially bred sturgeon into the wild, but the continuing decline in numbers indicates that reintroduction isn’t working well.

Wei said: “An artificially bred adult sturgeon only weighs about 50 kg and has low resistance to disease, whereas wild sturgeons weigh more than 225 kg and are stronger.” He added that inbreeding makes successive generations less competitive when they are introduced to the wild.

Although the breeding program can never replace the large numbers of fish already lost, the reproduction program will be continued to help the species survive, he said.

He urged wider protection measures and called for the recovery program to be strengthened. “It’s now or never,” he warned. “If no effective measures are taken, this ancient fish may die out in the next few decades.”

For related news from Probe International’s files on Chinese sturgeon, the endangered finless porpoise and other fish species that once thrived in the Yangtze, see here.