(April 24, 2014) Chinadialogue’s Beijing editor Liu Jianqiang reviews China’s newly revised environmental protection law which comes into effect in 2015 and represents the first time the law has been revised in 25 years.

By Liu Jianqiang for chinadialogue.net, an environmental issues website and journal 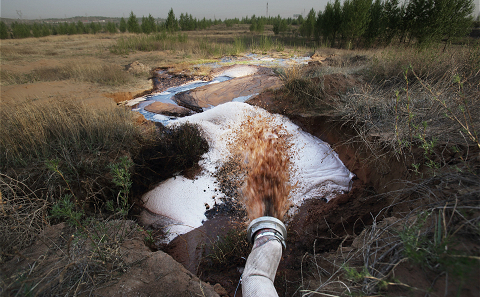 The success of China’s new environmental law will be in its implementation, says chinadialogue’s Beijing editor Liu Jianqiang.

The new law provides authorities with the tools to dole out harsher punishments and sanctions to polluters, including more heat for officials found to be falsifying data and ducking environmental impact assessments. Under the new law, individual citizens still will not be able to initiate public interest lawsuits and although NGOs will be able to pursue litigation, the number permitted to do so has been capped, most likely in order to prevent a flood of environmental lawsuits in local courts and local authorities from being sued too frequently — which raises the question: what is the point of the law? In any case, says Mr. Liu, China’s environmental problems cannot be blamed solely on the lack of a powerful law but are more “the consequence of weak implementation and failure to hold officials accountable for rampant pollution and ecological destruction. … What good is perfect legislation if our authorities fail to implement it? China’s new law cannot answer this question.”

China’s environmental protection law, which stirred great controversy during its amendment process, has finally been passed. The updated law makes significant progress in the area of public interest litigation and strengthens the legislative tools to punish polluters. But it fails to answer a key question: how to get local officials to enforce the rules effectively.

The Standing Committee of the National People’s Congress voted to pass the amended law on Thursday. It will come into effect in 2015.

This marks the end of a long road: the amendment process started in 2001 and the draft updates went through three fruitless readings before yesterday’s fourth and final round. At each stage, the proposed changes proved controversial.

Of the hotly contested points, the clause setting the rules for environmental pubic interest litigation attracted most attention. In the second draft, the government-backed All-China Environmental Federation was given sole right to bring environmental public interest lawsuits, prompting public discontent. Later, in the third draft, this right was extended to national level organisations. However, the changes again failed to convince the public.

In the final version, around 300 green NGOs that are registered at city level, and aren’t known to have breached any laws or regulations for the past five years, are given the right to bring public interest lawsuits.

This means that individual citizens cannot initiate public interest lawsuits. The number of NGOs allowed to pursue litigation has also been capped, probably to prevent local courts being flooded with environment lawsuits and local authorities being sued too frequently.

A step forward for the environment?

Despite these constraints, the updated law marks a huge step forward. It lays the foundations for future public interest litigation in China’s environmental sphere, and adds legal weight to the public campaign against pollution.

The law has also granted greater powers to the environmental protection officers to supervise and sanction polluters. Before the new amendments, environmental authorities lacked the right to seize property – from next year they will be able to confiscate equipment that allows illegal discharge of pollution. In the past, environmental authorities could only give small and toothless fines to deter businesses from illegally discharging pollution. Under the new law, however, they will be able to fine companies on a daily basis (rather than having to keep to an overall limit). This will almost certainly increase the cost of such activities. Chang Jiwen, a senior adviser at the State Council’s Development Research Centre, said the daily penalty would “phase out many non-compliant businesses”.

The new law is even tougher for individuals deemed responsible for violations including illegal pollution, fabricated discharge statistics and failure to organise environmental impact assessments. They can now be arrested.

“The newly-amended environmental protection law is the best of its kind and we have included some very strict measures,” said Chang Jiwen. “If well implemented, the new law will make a huge difference.”

That “if well implemented” is key. In China, how a law is enforced is much more important than how it looks on paper. A lack of good legislation is not the cause of China’s ecological crisis, but rather a failure by government to prioritise the environment and enforce laws effectively.

Before 2008, when the current Ministry of Environmental Protection was only the State Environmental Protection Administration (SEPA), and had fewer powers, it was far more robust and courageous. SEPA initiated an “environmental storm” – a series of strikes against law-breaking companies – in which even the country’s biggest electricity firm was fined. It ruled that local governments failing to implement environmental policies would temporarily be stripped of power to greenlight new projects. It halted illegal works at Beijing’s Old Summer Palace and hosted a public hearing on the project, enabling public participation and setting a good example of public decision making. SEPA also invested heavily in research of environmental impact assessment policies and Green GDP, in the hope of diluting China’s worship of GDP.

But in recent years, the Ministry of Environmental Protection (MEP), now vested with the right to approve environmental impact assessments, has relaxed its approach, granting approval to major projects that have proved harmful to the environment. The helpful hand it has extended to many polluting chemical and steel plant projects around Beijing, Hebei and Tianjin is in part to blame for the extreme air pollution suffered by the region in recent years.

The MEP rejected calls to include readings of pollutant PM2.5 in the Air Quality Index and to disclose air quality data until China’s top leadership threw its weight behind the push for transparency. When the US Embassy released its own PM2.5 readings the ministry accused it of “interfering in China’s domestic affairs”. It also refused to publish the outcome of a nationwide soil pollution survey, calling it a “state secret”.

These transgressions, and China’s deteriorating environment, cannot be blamed solely on the lack of a powerful law. They are rather the consequence of weak implementation and failure to hold officials accountable for rampant pollution and ecological destruction.

What good is perfect legislation if our authorities fail to implement it? China’s new law cannot answer this question.