(May 24, 2013) The new dawn of Chinese activism: organic, leaderless and technology-driven. This report by journalist Monica Tan looks at the rise of public protest in China, how activism has moved away from a select high-profile few to become a growing movement made up of ordinary people – ‘lao baixing’ – determined to stand up for their environment. Technology enables large masses of people to get the word out and to assemble at low risk: no one and everyone leads. Some see this grassroots’ movement as the road to democracy and accountability for China.

The original version of this article is available here. 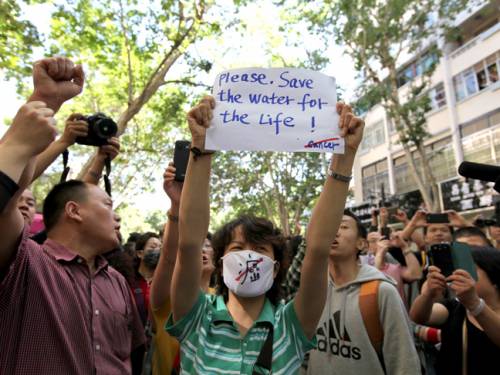 The facemask is a powerful symbol in Kunming.

Last Thursday, the southern Chinese city of Kunming saw its second large-scale protest in less than a month, with more than 1,000 citizens taking to the streets to oppose plans to build a petrochemical refinery and by-product paraxylene (PX) plant 30 kilometres away.

The most dramatic photos from the protests feature participants wearing facemasks with the letters “PX” crossed out in marker pen. The masks both instantly convey the threat PX poses to the city’s air quality and shroud the wearer’s identity.

Chinese activism used to center around key, radical figures that worked from the fringes of society: artist Ai Weiwei, lawyer Chen Guangcheng and writer Lui Xiaobo. But in a new age of environmental protests, which have grown by 29 per cent each year since 1996 according to figures reported in the Guardian, it is the laobaixing or “ordinary people” who have taken the reigns.

Shifang, Dalian, Xiamen, Shanghai and Ningbo have all recently seen large-scale NIMBY-style protests, with a style — organic, leaderless and technology-driven — that shares elements with the Arab Spring, Occupy Wall Street and the online activism of the Anonymous movement.

When I meet 22-year-old Xing Xing in an apartment not far from the site of the first protest she corrects me when I call her a protest “organiser”.

“We prefer to say we’re part of some of the main people responsible for these activities.”

Xing Xing is not her real name, rather the alias that disguises her online activism. Nor is she an activist by trade, but her day job in advertising may explain why she is such a natural communicator: passionate, eloquent and forceful.

Xing Xing tells me she first learned about the plant through friends in Chengdu, who have been battling their city’s plans for a PX plant for years.

A $2.5 billion dollar gas-and-oil pipeline that originates in Myanmar and connects the Chinese projects is nearing completion after eight years of construction. But it was only in April that chatter in the Tianya web forum began to grow about a similar project near Kunming. Forum users collected whatever crumbs of information they could find about the possible environmental and health dangers of the PX project and published them.

To this day, Xing Xing still doesn’t know who first proposed the first protest’s timing, May 4 at 1.30pm, and its location, Nanping Square near the centre of the city. The forum post and user account have since been deleted. But it survived by being passed on, and a group was created in the Chinese messenger application QQ just 10 days before the protest. When May 4 arrived, Xing Xing had no idea how many people would show, but she came prepared, carrying 500 leaflets, 100 masks and some marker pens.

At its height, Xing Xing estimates 3000 people were at the protest, some of whom probably joined off the street. But there were other groups, people she hadn’t met, who had also come prepared with banners and masks.

“By three o’clock we were seeing people buying water to share, throat lozenges for those hoarse from shouting, and giving out fresh flowers. This gave me a lot of confidence. I wasn’t expecting everyone’s reception to be so warm,” she says.

The protest also attracted the attention of the government, who responded with a press conference a week later. As Mayor Li Wenrong assured the media he would use a “democratic decision making process” and act in accordance to “the needs of the majority”, Xing Xing messaged me using the Weixin service to say she had been invited by the police to “drink tea”, a Chinese internet euphemism for police interrogation. She would not attend the second protest on the 16th, a date she had helped organise.

Thursday may not seem the most convenient day for a protest, but the only way to catch Chinese officials at work is on a weekday. At 10am on May 16, several hundred police in uniform stood guard outside Kunming’s provincial government headquarters on Zheng Yi Lu, or “Justice Street”. A plain-clothes policeman stopped to ask what I was doing. “What are you doing here?” I shot back. “My duty,” he replied coolly. Justice Street runs off a main road, so it was difficult to tell if any of the hundred or so bystanders were there for the protest and or just passing by.

And then it happened: a man stepped onto the steps of a dental clinic and put on a gas mask, as another held up a handwritten sign reading “Make public the environmental impact assessment report”. There was a sudden roar and a crowd gathered around him. The police, still hopeful of quelling the early stirrings of protest grabbed the masked man and forced him into a van that immediately sped off (he would later be released).

All that morning people poured into the street, crossing the lines of police trying to block both ends. Any apprehension at the heavy police presence melted at the sight of hundreds of cellphones beaming live to social media sites. Individuals spontaneously created photo-ops by holding up handmade signs and delivering impassioned monologues to rolling video cameras. The morning’s arrest became yet another trigger for protest, with a 40-year-old woman holding a sign bearing just the words, “Release them”.

By lunchtime the numbers had swelled to more than 1000. I met a girl of 16, a man of 70, and protesters of every age in between. There were salespeople, journalists, lawyers, business owners, retirees and designers. Most had taken the day off to attend. Notably absent were students and public servants. One student of the Yunnan University of Finance and Economics later told me the school had convened a special meeting to warn students off the protest. There was also the government department that held a day-long meeting, with an hourly roll-call, coinciding with the protest.

I frequently asked people if they knew who had organised the day. English teacher Fujia Xing, 23, said she didn’t, having learned of the event from a friend’s repost on Weixin. “So many people have just forwarded this on,” she says. “Hey it could be me!”

Weixin, which combines free text messaging with a function much like Facebook’s news feed, is an ideal tool for activism. Notably, it is also currently free from meddling by the country’s censors.

Protesters show me messages and photos circulating on phones: full of facts but also poetry about their city of “eternal spring”, her blue skies, and flowers that bloom all year round. I understand how a 57-year-old retiree can tell me how the city’s wind blows from the southwest and could bring with it refinery exhaust, or how a 40-year-old administrator can become so fevered about the release of an environmental impact assessment report.

But not everyone in Kunming is so wired; especially those who’ve migrated from the countryside. They fill the city’s lowest-paid positions and also breathe the air and drink the water. So that afternoon the protest turned mobile. It moved east down the city’s main street, with neither leader nor plan. Wherever the mob went curious onlookers would emerge from hotels, banks and restaurants. The mainstream media blackout on the protests meant this was the first time many had heard of the oil refinery and the growing opposition to it.

Every so often the protesters would surge into a wall of policemen. In these moments the crowd would cry “The police are Kunming citizens too!” and the policemen would slowly dissipate to a round of applause and shouts of “thank you, you’re fine men!”

For hours the people walked, collecting beeps of support from drivers trapped in standstill traffic. “The people of Yunnan, rise up!” they roared in unison. “Oil refinery, get out!”

At 4.30pm, Mayor Li Wenrong walked onto the street to talk directly to the protesters. He had the appearance of a university professor, and with the crowd pressing in on him delivered what seemed an off-the-cuff speech, full of urgency and a desire to be understood:

“Yes I’m the city’s mayor, but I’m also a resident of this city. You want to protect Kunming, and you don’t want her blue skies and clear waters to become polluted. The government shares this same desire as you do. After today I’m still going to live, grow old and die in this city. My parents, four brothers and sisters all live in Kunming. So I fully understand the appeal made by everyone today and thank every one of you. But you have to understand that this appeal has to pass through regular channels … and this [protest] is not a good channel.”

Li is a refreshing change from the country’s standard issue of bland officialdom. After speaking, he handed his megaphone to the protesters, inviting them to individually air their grievances. Amid the range of these demands: a city referendum allowing citizens to vote on the project, a full release of the environmental impact assessment report, a free and open media, the end of police harassment against protesters, and an open channel in which to communicate with the government. They were demands that proved more sophisticated than simple NIMBY-ism. What the protesters want is real political change.

To each, the mayor replied in detail, promising a kind of “town hall meeting”, and enlisting an advisor to collect the phone numbers of anyone wishing to attend.

But the day ended where it began and had never really left: online. It was demanded that Mayor Li open a Weibo account, a Twitter-like service that is immensely popular in China. He immediately promised to do so by midday the next day. And though only a few protesters were able to hear the mayor speak, their cellphones and video cameras carried his words and promises across the country.

With the protest winding down, I spotted ‘Eddie’, still carrying his sign reading “Democracy! It is beginning!” He wrote his number down to attend the mayor’s meeting. I took him aside and asked why he wasn’t afraid to do so. “By having the courage to stand up, I believe there will be more and more who too will stand up,” he replied. And did he believe the mayor’s words today? “No, but I’m willing to give him a chance”.