Trouble on the Yangtze

(December 19, 2012) A central government plan to dramatically increase China’s reliance on non-fossil fuels will derive two-thirds of that target from hydropower – “an increase on par with adding nearly one Three Gorges Dam a year,” reports Jane Qiu for Science magazine. In her article on over-development of the country’s river pulse, the once mighty Yangtze, Qiu looks at the threat China’s damming fever poses to river habitats and species, the calamity potential of dam construction in quake-prone regions and mounting criticism of China’s biased environmental impact assessment process.

“Trouble on the Yangtze,” by Jane Qiu for Science magazine 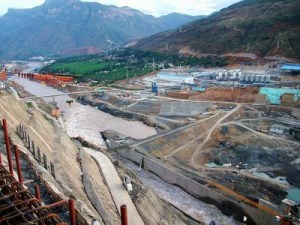 The controversial Longkaikou project, one of several slated for the Jinsha River. Probe International.

A 770-kilometer-long stretch of the lower Jinsha River, the westernmost of the major headwater streams of the Yangtze River in China’s southwest, will soon be transformed by a cascade of four, massive dams with a total capacity of 43,000 MW, as part of a central government plan to ramp up the country’s non-fossil fuel energy supply by 2020.

“It’s worrying to see so many proposed large dams, one immediately after another,”[1] Zhang Xiaodong, deputy director of the China Earthquake Networks Center in Beijing, told science writer Jane Qiu for her report on over-development of the Yangtze River.

The causes for concern are significant.

Critical habitat and endemic fish are threatened by dam construction—the rare Chinese river dolphin, unique to the Yangtze River for 20 million years, was declared functionally extinct in 2007 due to habitat degradation.

In addition, Qiu notes, dams are multiplying across a geologically complex region “crisscrossed with active faults hundreds of kilometers long.” This is increasingly ominous news as recent analysis by Chinese scientists indicates a strong link between the devastating May 12, 2008 earthquake in southwestern Wenchuan, Sichuan and the nearby Zipingpu Dam.

While “most scientists agree that the Wenchuan hypocenter, or depth of the initial rupture, is directly beneath the reservoir” of the Zipingpu Dam, “just how deep it lies is in dispute,” reports Qiu. Calculations that place the hypocenter at 14 and 19 kilometers beneath the surface suggest water from the reservoir could not have reached the fault at such depths. Others contest that this calculation is based on data from monitoring stations too far from the epicenter, and claim that data from stations closer in range reveal a depth “as shallow as 6 to 9 kilometers—within easy reach of water from the reservoir.”

Geophysicist Liu Qiyuan, of the China Earthquake Administration (CEA’s) Institute of Geology in Beijing, concedes the higher calculation of 14-19 km he arrived at, along with the China Earthquake Networks Center (CENC), does not rule out the possibility the dam reservoir hastened the Wenchuan quake: “Small incremental stress changes due to the reservoir could rupture critically stressed faults even without water reaching them,” he told Qiu.

Other studies, meanwhile, suggest reservoir weight and water infiltration can accelerate a seismic event by tens to hundreds of years. Numerical modeling studies that look at stress changes caused by the reservoir have concluded the Zipingpu reservoir “significantly impacted” the Beichuan-Yinxiu fault running along the reservoir and increased the stress on the hypocenter of the Wenchuan Earthquake, reports Qiu. “That could hasten the occurrence of the earthquake by tens to hundreds of years,” contends Xinglin Lei, a geophysicist at the Geological Survey of Japan in Tsukuba, and the author of one such study that reached this conclusion.

This conclusion is also shared by Shemin Ge, a hydrogeologist at the University of Colorado, Boulder, and her colleagues. Speaking to Qiu, Ge said, “We need to assess whether the proposed reservoirs could significantly speed up the accumulation of stress and cause rock failures.“

Fan Xiao, a geologist and chief engineer of the Regional Geological Survey Team of the Sichuan Geology and Mineral Bureau came to the same conclusion in a study release last week by Probe International. The study based on nearly 60 other studies of the Wenchuan earthquake, backs earlier arguments that the disaster resulted from the mass loading and increased pore pressure caused by the Zipingpu dam reservoir after filling. Mr. Fan also suggests that reservoirs can not only accelerate an inevitable seismic event but can also trigger unanticipated tectonic activity. For that reason, he says, plans to build dozens of large dams with accompanying large reservoirs in vulnerable regions should be urgently reconsidered.

Other stressors to geological stability, says Qiu, include heavy rain, particularly during monsoon season, which can trigger landslides. According to Yang Yong, the director of environmental group the Hengduanshan Society in Chengdu, massive landslides have blocked the Jinsha River for days at a time in the past.

Qiu also notes that China’s environmental impact assessment (EIA) process has come under fire for the ways in which EIAs can be easily manipulated by developers, with government help, to push through controversial hydropower projects. According to Wang Mingna, a hydrologist at the Chinese Institute of Water Resources and Hydropower Research in Beijing, “the EIA is just about friends evaluating each other’s projects.”

Manipulation of EIAs is nothing new, says Patricia Adams of Probe International. For decades, governments have mandated EIAs that underestimate costs and over estimate benefits and rob citizens of the legal power to intervene. “EIAs are exercises in deception and should never be relied upon to stop ruinous projects,” she says. “Only when citizens are empowered with laws and a judicial system to protect their environmental rights, will China’s mega-dam building end.”

“Trouble on the Yangtze” by Jane Qiu is available here at Science magazine, by subscription only.

1: Geologist John Jackson, author of “Earthquake Hazards and Large Dams in Western China,” says positioning dams in a cascade flow, one after another in close proximity, can create a potentially devastating domino effect if one dam fails. The lack of terrain between dams means energy cannot dissipate in the event of catastrophic dam failure. [See Chinese dams will damn the country].

Earlier this year, Probe International published “Earthquake Hazards and Large Dams in Western China,” a report by geologist John Jackson, whose detailed knowledge of western China and four decades worth of experience studying earthquakes and seismic faults gave rise to a project to cross-reference 130 dam sites in the region (either built, under construction or proposed for construction) with maps of seismic hazard. Jackson found that of those 130 sites, 98.6 percent of dams constructed in western China are located in high to moderate seismic hazard zones.

Dam madness
As the fierce struggle between China’s hydropower industry and environmental conservationists rages anew, what has become clear in the meanwhile: the country’s rivers cannot sustain the current pace of development.