(August 13, 2012) Thai opponents of the proposed Xayaburi dam for the Mekong River in Laos are taking their case to court. A group of Thai villagers have filed a lawsuit to block a state-run company from buying electricity generated by the dam in a bid to halt the project, opposed by downstream nations, and set a precedent for future cross-border projects. 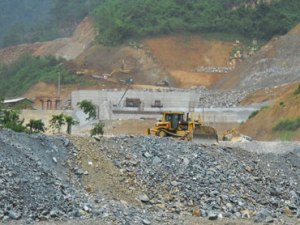 A recent investigation of the Xayaburi Dam site by International Rivers revealed that Thai company Ch. Karnchang has already undertaken significant resettlement and construction activities at the project site, contrary to claims that only preliminary work is underway. Photo: International Rivers / flickr

Thai opponents of the US$ 3.6 billion Xayaburi hydropower dam planned for the Mekong River in Laos are filing a lawsuit to try to cancel the Thai agreement to buy electricity from Laos.

The lawsuit argues the agreements are unconstitutional and illegal because they did not involve public consultation with villagers or downstream countries.

Conservationists and residents of communities along the Mekong River asked a court in Bangkok on Tuesday to stop a Thai government power company from buying electricity generated by the proposed Xayaburi dam.

The suit said the Thai government should not have allowed the Electricity Generating Authority of Thailand (EGAT) to sign an agreement with Laos’s Xayaburi Power Co. to buy electricity from the 1,260-megawatt hydropower dam before assessing the environmental impact of the project.

Thirty villagers from communities in Thailand’s eight provinces along the Mekong filed the lawsuit against EGAT, the Thai Cabinet, and three other state entities.

Under an agreement, EGAT will buy 95 percent of the electricity generated by the dam once it is completed.

Thai activist Niwat Roykaew told Radio Free Asia that legal action was the only recourse for opponents of the dam, after they had voiced their concerns about the project to various groups and the Lao and Thai governments.

The downstream countries of Cambodia and Vietnam also oppose the project out of concern for the effect on fish stocks.

The lawsuit is likely to face strong opposition from Thailand’s energy authorities.

Pianporn said she hoped the suit would set a precedent for future cross-border projects.

She said, “We would like to see that this lawsuit would set a new standard with Thai overseas investment that at least they have to follow or respect the law in their home country.”

Laos suspended the Xayaburi dam project after strong opposition from Cambodia and Vietnam, but work on infrastructure projects has gone ahead, say activists.

In July, Mizzima reported on a statement in which US Secretary of State Hillary Clinton said the US was concerned about the planned construction of the Xayaburi Dam, as it would likely have a major impact on fishing, agriculture, the environment and people’s livelihoods and health in Southeast Asia.

The Xayaburi Dam is a proposed hydroelectric dam on the Lower Mekong River approximately 30 kilometres (19 miles) east of Xayaburi in northern Laos. The dam would produce hydroelectric power to be sold to Thailand.

Construction was suspended in early 2012 after complaints that the dam’s feasibility studies were incomplete and countries downriver wanted more information.

Construction began in March 2012 after Ch. Karnchang, the Thai builder, announced it had signed a $2 billion contract with the Xayaburi Power Company.

Cambodia’s government quickly reacted to the announcement, threatening to take Laos to international court if it chose to build the dam unilaterally.

Laos announced a halt to construction on May 11, 2012, following complaints from neighbors and environmental groups.

The Xayaburi Dam site is located 350 kilometres upstream of Vientiane and 770 kilometres downstream of Jinhong, China, the last dam among seven Chinese dams, including four existing dams and three planned dams. In terms of mean energy supply, it would be the third largest project among those dams considered for development on the mainstream in the Lower Mekong Basin.

If the final investment decision were made, the dam’s construction would take eight years to complete. A Strategic Environmental Assessment commissioned by the Mekong River Commission recommended a 10-year deferral of all Mekong mainstream dams in Cambodia, Laos, Thailand, and Vietnam, and called for further studies. The MRC warned that if Xayaburi and subsequent schemes went ahead, it would “fundamentally undermine the abundance, productivity and diversity of the Mekong fish resources.”

Studies note that fish are a staple of the diet in Laos and Cambodia, with around 80 per cent of the Cambodian population’s annual protein intake coming from fish caught in the Mekong River system, with no alternative source to replace them. The dam would also restrict the flow of water over agricultural areas linked to the river, according to environmental groups.

China and the Cascading Geopolitics of Lower Mekong Dams