Have you heard about the Yazidi people?

The Yazidi crisis is not as familiar to people as the crisis in Syria, if people know who the Yazidis are at all. Yet, everyone has heard of ISIS, so why then has one of their most brutal atrocities gained such little public attention?

In the summer of 2014, ISIS entered one of the largest communities of Yazidis – the peaceful, holy town of Sinjar, Northern Iraq. What followed was a chilling ultimatum: convert or die. Families were separated. Men and boys over 12 who refused to convert were killed. … And the women and girls, considered ‘spoils of war’, were enslaved, systematically raped, beaten, and sold at slave markets (virgins fetch the highest price).

I sometimes wonder whether one of the reasons people turn away from this issue is because the horror is just too much.

Have you heard about the Yazidi people? This is a question I’ve been asking a lot over the last couple of months – to family, friends, work colleagues, waiters asking me what I’m working on as I sit huddled in cafés, stealing every spare moment I have in order to email MPs, campaigners, anyone to help in my quest to raise awareness and come up with a plan. So far the answer, pretty unanimously, has been “no”. At first, I would relish this opportunity to educate and inform people on who the Yazidis are and what they are currently facing but recently I have been getting more and more frustrated by vacant looks and confused head shakes – how do you not know? Why have you not heard?

On Tuesday, March 28, 8PM at the Green Beanery cafe-roastery, Probe International, in conjunction with Grounds for Thought, hosted a discussion night on the Yazidi crisis and Canada’s cap on Yazidi refugees at 1,200 (see below). A video of this event is available to view here. 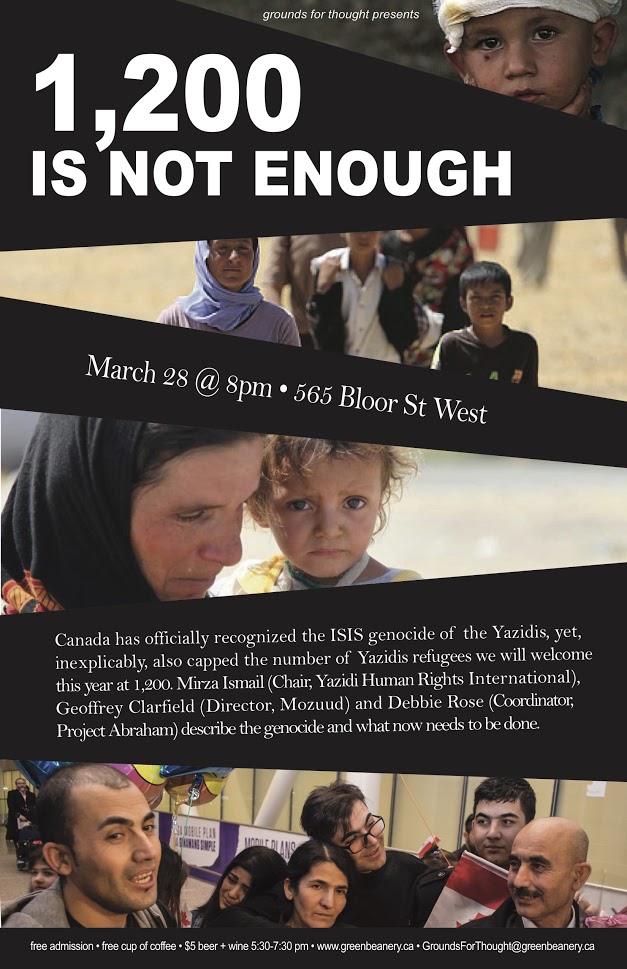