(June 26, 2013) Former Chilean president Michelle Bachelet, who hopes to regain power at election time later this year, has come out against Chile’s HidroAysén mega-dam scheme. Most Chileans also oppose the controversial plan that would flood globally rare forest ecosystems, river valleys and farmlands in the country’s southern Aysén region and tame two of the world’s wildest rivers. In a complete about-face from her stance as President, Bachelet openly declared her opposition to the five planned dams in Patagonia in a televised debate.

This article originally appeared in The New York Times 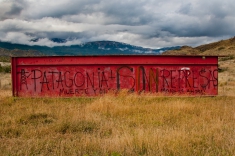 The HidroAysén project is extremely unpopular with the Chilean people, as demonstrated by this graffiti in the Aysén region of Chilean Patagonia. Photo courtesy of James Q Martin.

Most Chileans also oppose the plans to tame two of the world’s wildest rivers and build more than 1,000 miles (1,600 kilometers) of power lines to the grid that powers the nation’s capital. Some mass marches against the project have turned violent in energy-strapped Chile.

Bachelet, a center-leftist who ended her 2006-2010 presidency with high popularity ratings, is leading in polls ahead of the Nov. 17 presidential election.

“It’s not viable. It shouldn’t go on,” Bachelet said late Sunday during a televised debate with other candidates who are competing to represent the center-left coalition in the elections.