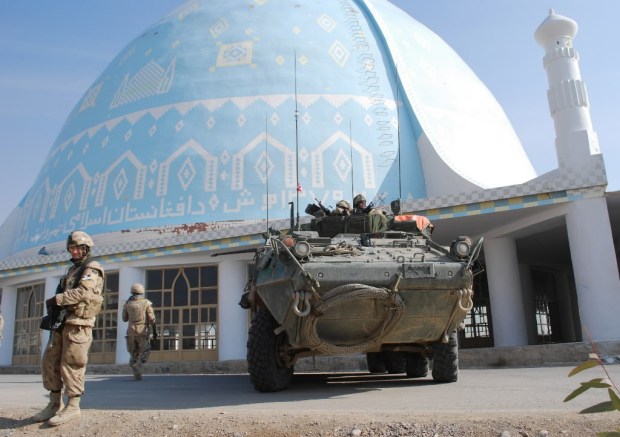 Canadian soldiers keep a close watch on their surroundings as representatives of the Canadian International Development Agency tour the Kandahar University campus in Kandahar City in 2008. Efforts to better protect the university’s 1,500 students — including about 75 women — prompted CIDA to fund the construction of a three-kilometre-long wall around the property.

All those Asian countries — China, India, Thailand, South Korea — somehow managed to develop without your help, or the help of other government aid agencies around the world. Africa, in contrast, remains the least developed region of the world, despite $1-trillion in “development assistance” from you and your fellow aid agencies.

What exactly have you developed? You took Haiti under your wing, lavishing it with $1-billion in foreign aid. It should be a shining success story. Yet the more that Haiti received aid, the less capable it became. Haiti is today the poorest country in the Western Hemisphere, with 80% of the population living under the poverty line and 54% in abject poverty.

More than two-thirds of the labour force does not have formal jobs. The 10,000 foreign-aid-funded NGOs that feed, clothe and house so many Haitians have also crippled the ability of Haitians to feed, clothe and house themselves. The government depends on foreign aid agencies for more than half of its annual budget, earning Haiti the moniker, The Republic of NGOs.

Or look at Mali, another one of your billion-dollar babies. You’ve concentrated your efforts — and our money — on making Mali a model of democratic governance. How nice that you tried to strengthen Mali’s Ministry of Justice and its civil society to make laws more sensitive to the rights of women and youth and to promote good environmental governance. How nice that you tried to strengthen Mali’s electoral system. And how unfortunate that all those efforts came to naught. Mali is stuck at 182 out of 186 on the UN’s Development Index. Its “democracy” was recently overthrown in a military coup. And now the country is in a civil war.

Without all that politically correct meddling, perhaps Mali would have muddled its way through to a governance system better suited to its society. Botswana did by sticking to basics, like property rights and the rule of law. Unlike other countries, foreign aid in Botswana never represented a large share of its GDP and is now negligible.

The billions spent in Haiti, Mali, and other aid-dependent states around the world were a waste of money — the only ones in the Third World that we can confidently say profited from our dollars were the officials who placed 10% to 20% of them in safe keeping in personal Swiss bank accounts. But our aid wasn’t just an economic waste — it often did positive harm.

Take your big foray in Mali, where you dammed the Senegal River, destroying a centuries-old flood plain on which hundreds of thousands of farmers and fishermen depended for their livelihoods, and millions depended for their food. As for the modern irrigation dam designed to bring Malians into the modern economy? It’s now 30 years later and we’re still working on it. In Haiti, too, you are financing new projects to repair the damage done by old ones. This is a near-universal story with aid.

Of course, we shouldn’t judge the accomplishments of the Canadian International Development Agency solely by its track record at international development — that would be a naive view of the purpose of foreign aid. Foreign aid is also — maybe even mainly — a pork barrel for local friends in need. When Quebec looked like it might secede, foreign aid came to Canada’s assistance by awarding fat contracts to favoured Quebec-based companies like SNC-Lavalin, to demonstrate to Quebeckers the benefits of Canadian confederation. When Quebec-based companies don’t need to be courted, the aid contracts, and jobs that go along with them, tend to be granted to companies in politically important ridings.

That foreign aid game is changing now, starting with a house cleaning. Last year the federal government suspended aid to Mali, saying that security doesn’t permit it, and this year Julian Fantino, who will go down in history as the last minister of CIDA, froze funding to new projects in Haiti when he couldn’t see worthwhile results.

CIDA will no longer be an independent agency of the government — it will be downgraded through incorporation into the Department of Foreign Affairs, Trade and Development and then, quite possibly, be downsized as well. Foreign aid started as laudable emergency relief in time of calamity. It then morphed into nation-building enterprises that did more to hinder than help the poor. Now, nation-building is beginning to be phased out, allowing aid to revert to its original, and only legitimate, role.

Patricia Adams is an economist and executive director of Probe International.
E-mail: PatriciaAdams@probeinternational.org