(January 22, 2013) China’s largest-ever forced relocation effort, in the northwestern gateway province of Shaanxi, is set to transform the lives of more than 2.8 million people over a period of 10 years. The massive migration, even by China’s standards, is currently underway in part to make way for another of the country’s vast infrastructure projects,  the enormous south-north water transfer scheme. Drawing on his conversations with migrants, writer Andrew Stokols in this update for Chinadialogue.net, observes the human cost of China’s quest for modernity which has left many migrants struggling to meet new expenses and feeling stung by a loss of independence, purpose and stability.

By Andrew Stokols for Chinadialogue.net, published on December 17, 2012

This sudden transformation has had a traumatic effect on many residents. Moving from subsistence-based agricultural lifestyles to semi-urban lifestyles without proper job training or without provision of alternative means of living has left many residents without a stable source of income. Because the government is only providing a small portion of the cost of the homes, those who want to move must find a way to pay the rest, a sometimes-daunting proposition. 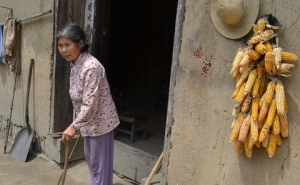 People are being moved from villages where older houses are at serious risk from landslides and floods. (Image: Andrew Stokols)

On the night of July 18, 2010, the Li family courtyard in southern Shaanxi’s Qiyan village was buried without warning by mud and rock in a landslide caused by torrential rains. Li Jun (a psuedonym), now 55, was pulled from the rubble the next day after being buried for over 24 hours. He was the only survivor. Along with extended relatives and friends he lost his wife and his daughter.

Two years later, the construction of a resettlement area down the hill from the old village is being promoted as a “model community” for an ambitious government programme that aims to move 2.8 million people within Shaanxi province, mostly in the mountainous south, from unsafe areas to new housing.

Today, many people have moved into the development that features rows of new white townhouses. But many in Qiyan village say promises made in the wake of the landslide by officials have not been kept. Economic hardship for recently moved villagers shows the difficulty of trying to reduce rural poverty by government-led relocation, which often fails to provide landless rural residents with new opportunities.

“The environment here is better, but our previous life up in the canyon was better,” says Mrs Li, who relocated with her husband two years ago to the new town. “Before, I never ate anything from the government’s hand. I was independent. Now we don’t have any land and we are reliant on the government.  We are in debt and we have to work, but there is not much work we can do now.”

Most villagers, however, agree the resettlement programme is a good idea and that they would rather live in the new area than remain in old homes up in the canyon. The village of Qiyan is strung along a craggy canyon reaching back from a small valley below. While intending to relocate those in danger from landslide, the process has left residents in the most dangerous areas behind.

“The governor said not to worry, that we would help these people after the landslide,” says Mr Huang, a villager who works in nearby Sichuan province but returns home often. “But now many of us still don’t have better homes; only people with money can afford to move into the new area.”

This article continues in full at the publisher’s website.

About the author: Andrew Stokols is a 2012 Fulbright Scholar researching new rural town design in western China, based in Xi’an.