No country for private houses

(October 26, 2012) The history of government property seizure in China reads like an appalling dystopian fiction. A new film, which debuted in New York on October 28, looks closely at the astonishing but all-too-true stories of individual citizens – survivors of this ongoing battle for property rights – who have been robbed of their homes, their lands, unconscionably beaten, tormented and forced to endure bizarre and cruel new realities as a result of a social-political ideology gone mad and corrupt officials and developers who will stop at nothing in their pursuit of power, privilege and gain.

No Country for Private Houses, directed by He Liren of the Beijing-based Transition Institute, debuted in North America on October 28 at the Reel China Documentary Festival hosted by New York University.

Update: This documentary is now available on Probe International’s YouTube channel and can be viewed in full, here.

Review: No country for private houses

by Lisa Peryman for Probe International

Chinese-language promotional poster for “No Country for Old Houses”.

First screened at the Beijing Independent Film Festival in 2011, No Country investigates the phenomenon of home appropriations and demolitions across China dating back to Mao Zedong’s Cultural Revolution in the 1960s, when politicized youth-turned-militant Red Guards seized and destroyed property in the name of reform. In rural areas, large estates were confiscated from feudal landlords and divided into people’s communes. In urban areas, private homes were turned into public houses for occupation by paying tenants, who were charged a set, nominal rent.

At that time, home-owners and their families – deemed exploitative, bourgeois “class enemies” – often found themselves squeezed into single rooms in their own homes and were even charged rent, if they were lucky enough not to be made homeless outright. A great number were brutalized in the transition, humiliated publicly, persecuted and their possessions taken. People lost their lives in violent struggles to protect their property, as they still do to this day. Others were intimidated into handing over the deeds for their homes to officials.

Dong Jiqin, outside his home on November 2, 2008. His house was torn down soon after this photo was taken. The sign reads “民宅勿扰” – Private house: Do not disturb.
(Source: Zhengjun, 2008)

He’s  film concentrates on the personal stories behind this phenomenon, such as Zhou Guiying, who has been fighting for the return of her ancestral home since 1958, when private home-ownership in urban areas was abolished during that era’s socialist transformation.

When Zhou and her family, eleven in total, were downsized to a small room – an injustice that was to last 50 years – Zhou’s parents gave her and two of her siblings up for adoption when Zhou was two, as a result of extreme confinement.

Although the state, decades later, moved towards returning homes to their owners, the local government of Changsha, where Zhou’s family lived, declared only private dwellings and not rental units would be returned to their original owners. During the bureaucratic shuffle to reclaim her family home, Zhou discovered unscrupulous officials had doctored her family’s case history to show that their home had been rented out and was not eligible. Further research proved the house had not been rented at all. Zhou’s home is currently slated for demolition but Zhou and her brothers and sisters are steeling themselves for a fight to the end.

“When it comes to it, we will give our lives. We will turn into eight burning torches,” said Zhou, referring to the practice of self-immolation in protest against forced evictions and destruction of property.

Land grabs are no less of a problem in modern-day China due to illegal seizures by local governments who appropriate and transfer land and property to developers. According to John Garnaut, writing in the Sydney Morning Herald, millions of Chinese citizens have lost their homes to forced land appropriations and some 125,000 “mass incidents,” or public uprisings, in 2010 were the result of such seizures.

At its essence, the ”malformed” development model involves local governments appropriating land from peasants and urban households and transferring it to developers or government investment vehicles, where it is then used as collateral for loans or subdivided to fund ongoing construction costs….

This model of economic development has led to extraordinary domestic security build-up on one side – increasingly relying on sub-contracted thugs – and an increasingly bold citizens’ rights movement on the other. Some analysts have warned of the ”mafia-isation” of local government.

As a result, says John Garnaut, President Hu Jintao’s directive to prioritize building a “harmonious society” has since been usurped, in official circles, by the term “stability preservation.” 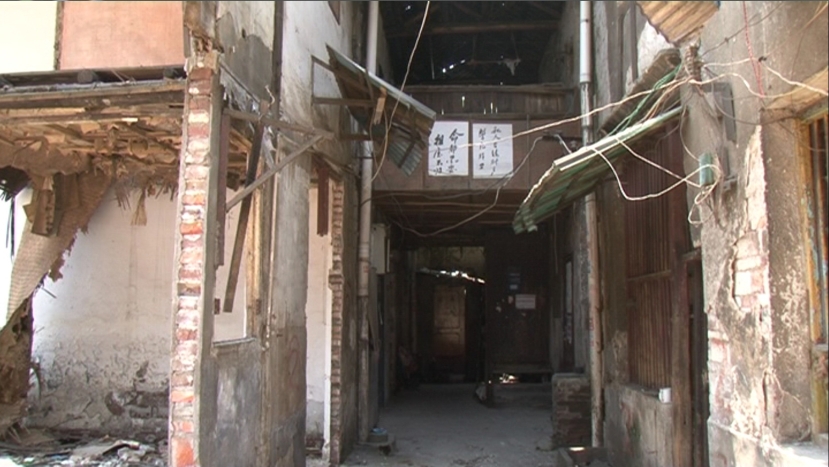 An unidentified house in the throes of being torn down. Source: Zhengjun, 2008

At the time this picture was taken, Ni Yulan, and her husband, were living in a park.

One particularly tragic story documented by He Liren’s No Country for Private Houses involves Ni Yulan, a once prosperous lawyer, whose house was forcibly demolished without compensation. Probe International published “The persecution of Ni Yulan” last year and her story is told anew directly by Ni in He’s documentary. Ni lost everything, except her husband, as a result of trying to stand up for her rights. For her trouble, Ni was crippled, imprisoned and prevented from practicing law. She and her husband are now homeless. Their house has been destroyed.

China’s real estate market: pulling the rug out from under the citizenry, by You Chenli, with the Beijing-based NGO Transition Institute, looks at rampant property expropriation in China and finds “local government, and not business developers or real estate speculators are the drivers of these problems.”

He Liren works for the Transition Institute, an NGO and think tank that researches China’s most pressing social issues. This is He’s first film. At the end of 2007, He started to survey and collect information on China’s private real estate market. While shooting the film, He traveled to Beijing, Nanjing, Hangzhou and Changsha, and finished filming in 2010. The final editing of the film was completed in July, 2012.

No phenomenon can exist in isolation, and the tragedy of forced evictions must, of course, have an institutional background. After seeing so many houses torn down at the behest of our government, we have to ask ourselves how it is that we Chinese cannot even protect our own property. By thinking about these problems, we recognize that every problem in today’s society has a historical cause.

Based on this, our film details the misfortune that has befallen private property in China over the past 60 years. This unfortunate history tells us that the forced eviction from legally held property is not an uncommon occurrence. Where political power is greater than the force of the law, it is inevitable that the rights of citizens will be violated. If this situation continues, private property will continue to face extinction in China, and perhaps someday, all of our homes will be threatened.